Sears Park is located in Toucson, Arizona, and was next to a standalone Sears store which opened in 1965. Developer Joseph K. Kivel spent years in litigation trying to get zoning approval for his mall, and ended up exchanging 9 acres to use as a city park “buffer zone” as part of the deal. This is also the location of the Sears Substation, an electric substation built before the mall. In 1975 this became Park Mall, in 1998 Park Place. Sears closed its doors in 2018. Perhaps Bill Sears of the Tucson Citizen took this photo? 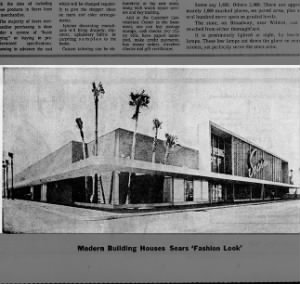